The Fort Beaufort Advocate and General Advertiser, first published on 23 July 1859, was a weekly publication produced on Saturdays. 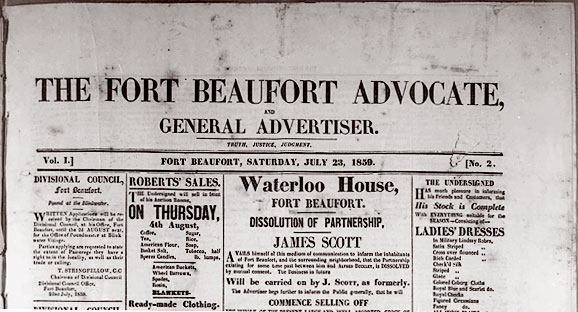 Nadine Van der Merwe realised the potential interest of this publication for genealogists, especially in the run up to the bicentennial of the 1820 settlers, and began to take pictures in her local library with a view to transcribing them. She then realised what a large project this was, and also that many issues were missing, so she approached eGGSA for help. The eGGSA management committee agreed to buy digital scans of the newspaper covering the period 1859-1874 from the SA National Library, and these are now being transcribed by Nadine Van der Merwe and Lorraine Beechey. Sue Mackay started adding them to the eGGSA website on 1 March, and these can now be seen in the eGGSA Newspaper Extracts section.

Because the entire paper has been scanned, the transcribers were not under the same time constraints that I was when photographing extracts from the Grahamstown Journal and other 19th century newspapers in London with a digital camera, when I could really only focus on BMDs. These new transcriptions contain all sorts of interesting snippets, advertisements, shipping news and sometimes the downright bizarre! Many of the 1820 settlers moved into the Fort Beaufort area, so in this bicentennial year we should be especially grateful to Nadine and to eGGSA for making this project possible.

Alta Griffiths has scanned several years of this publication and Brenda Gassner and Lorraine Beechey are working their way through these. The first quarter of 1827 has now been added to the Newspaper Extracts section of the eGGSA web site

Additionally, Liz Eshmade has contributed her transcripts of Colin Graham Botha's extracts from from earlier issues of this periodical, Baptisms of English person, 1810-1821,  and marriages of English persons, 1806-1821, and these have been added to the BDMs database section of the web site.

Alta Griffiths has scanned several years of this publication and a start has been made on transcribing extracts by Brenda Gassner and Richard Ball. The first extracts, from the year 1826, have been added to the Newspaper Extracts section of the eGGSA web site

Additionally, Liz Eshmade has contributed her transcripts of Colin Graham Botha's extracts from from earlier issues of this periodical, Baptisms of English person, 1810-1821,  and marriages of English persons, 1806-1821, and these have been added to the BDMs database section of the web site. 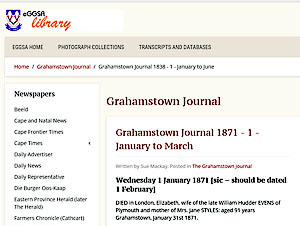 Sue Mackay writes: I have finally been able to photograph the next couple of years, from 1871 onwards, of the Grahamstown Journal at the British Library in London. The first batch can be seen among the eGGSA Newspaper Extracts.

This batch is considerably longer than usual, not only because there are a few lengthy obituaries but because I got seduced by a series of articles on Life at the Diggings, describing the burgeoning businesses at the diamond fields.

Go to SAcoronavirus.co.za for official government updates on Covid-19

eGSSA serves its members by:

promoting interest in the fascinating field of genealogy.

promoting a number of projects aimed at expanding the availability of South African genealogical sources online.

For many years, there have been people who, for various reasons, could not join a regular GSSA branch. Some of these reasons include living too far from a branch or living outside South Africa. These people still have a need to belong to a branch and to enjoy the benefits of GSSA membership, such as receiving GSSA's journal, Familia. eGSSA has been established to meet these needs. This is an ideal opportunity to become part of GSSA and to step into this exciting era.

At eGSSA we have an Online shop where you can buy the various publications of the Genealogical Society of South Africa, as well as a number of other genealogical, historical and cultural items.

There are indexes to the articles in Familia, the quarterly journal of the GSSA and those in genesis, journal of eGGSA itself. In addition we have a download library with some free books in pdf format, a number of documents from the South African Archives as well as photographs of graves in South African cemeteries.

We are able to organise the photographing of documents from the South African Archives at Pretoria (TAB), Bloemfontein (VAB), Pietermaritzburg (NAB) and Durban(TBD).

houses several collections of photographs as well as other information drawn from original sources:

To search the web site, use Search

This Web Site, created by André van Rensburg, is now maintained by eGGSA.